UpdraftPlus 1.11.20 onwards (release: December 2015) allows the owners of WordPress Networks (a.ka. WordPress Multisite) to restore single sites. i.e. You can restore a single site from the network, whilst leaving others untouched. This is great for keeping things simple, and especially useful if one of your sites gets mucked up but you don’t want to roll back the entire group of sites and lose changes on other sites.

For full instructions please view the video and text below:

To use this feature, simply press the “Restore” button in UpdraftPlus in the usual way. After the backup is downloaded and scanned, you will be given the choice of which site to restore, as in the screenshot below.

Note: you will only be given the choice of which site to restore if:

The option will look something like this (at the bottom of this screenshot): 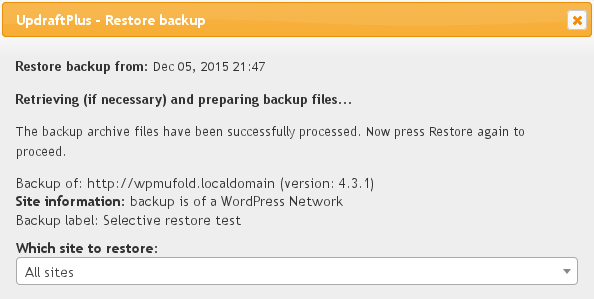 If you choose “All sites”, then the entire backup will be restored – everything on the network should then be restored back to its previous state. If you choose one of the individual sites from the backup, then only tables and media belonging to that site will be restored. (For those interested in the internals of WordPress, that means the tables with the site ID prefix, and media in the specific sub-directory of your media folder belonging to the site).

There are just a few things to be aware of: